Discover how much worth of YouTube star and singer Queen Naija is. To get to know more about her, other facts about Queen Naija you may be interested in are below.

Queen Naija is an established Youtube star known for having run a YouTube channel “Chris and Queen”, who has recently started a music career. She started to run the channel “Chris and Queen” with her ex-husband Chris Sails in 2016. They made a major breakthrough on YouTube in one year after having uploaded prank videos, vlogs and stories from their personal life. The WealthyLeo estimates Queen Naija’s net worth at an impressive 4 million dollars. There is no way to know the certain wealth of Queen, WealthyLeo focuses on her estimated net worth.

Queen Naija’s real name is Queen Bulls who first caught on by uploading cheating prank video to YouTube. After divorce from Chris Sails, she created her own YouTube channel “Queen Naija” on April 4, 2017. Also, she started singing in the same year. In 2018, Queen Naija signed a record deal with Capitol Records.

How has Queen Naija increased wealth since the beginning of her career?

She began her YouTube career with her ex-husband. As of 2018, her solo YouTube channel has over 3 million subscribers and it has more than 255 million views.

Queen Naija dropped her debut single titled “Medicine” on December 31, 2017. Medicine’s official video was first introduced on Youtube on March 29, 2018 and at this moment the videoclip has more than 65 million views. The song debuted number 45 on the Billboard Hot 100, giving Queen Naija her first entry on the Hot 100 chart. After having signed a multi-million deal with Capitol Records, she released her self-titled debut album on July 27, 2018.

How old is Queen Naija?

Queen Naija was born on October 17, 1995 in Detroit, Michigan, USA. She has a quite big family that she dedicated the video called “Meet My Crazy Family” on Youtube to. She has two younger siblings, Tina and Terrell who also came up with the idea to have a joint YouTube channel named “Tina & Terrell”. Queen Naija is open to her subscribers and did not hide the dramatic truth about her father. In the video “The Truth Behind My Dad” she revealed the information that her father is Arabian from Yemen who was deported from the United States when she was only 2 moths old. Consequently, she has never seen his father and they do not keep in touch.

What about her relationship, Queen met Christopher Sails when she was 18 years old while studying in high school. They created their own channel on Youtube called “Chris and Queen” that had many vlogs, challenges and pranks. Chris and Queen became famous as a couple sharing videos titled “Cheating Prank On Wife“. However, their marriage did not last long because of husband’s betrayal and finished in 2017. Queen has a son named Chris from this marriage. He appeares in many Queen’s videos where she looks like a caring and tender mother.

Starting from 2018, she is dating Clarence White, a businessman and Instagram star. In August they announced that they were expecting a baby girl.

If you are looking for Queen Naija’s t-shirts, posters, phone cases, sweatshirts and other things, you can visit Rageon and RedBubble.

Queen Naija has never hidden the information about her tattoos. She shared the video “My Tattoos And Meanings” where she said that in 2016 she made her first tattoo on the chest. It is an Arabic phrase which means “Love yourself first”. 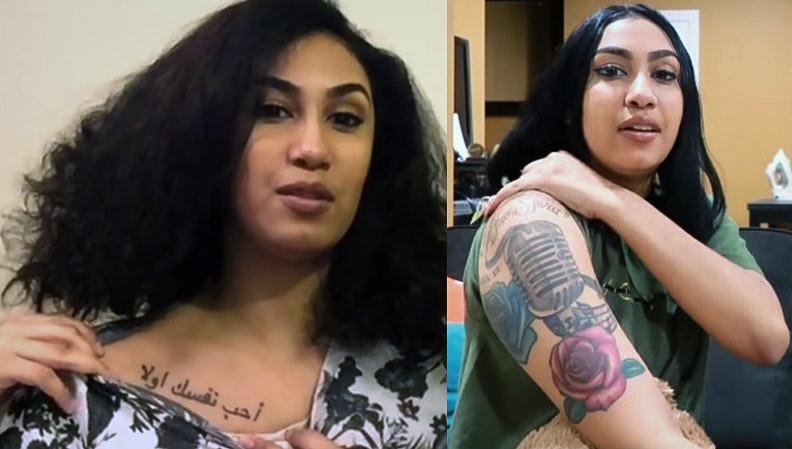 Besides, she has the tattoo of a michrophone with the music notes on the right arm that she explains in the following way  “I do music. So I have dream on my arm”. There are two roses of blue and red colours near the michrophone. The phrase “Free Spirit” over the michrophone means what kind of personality Queen is, she describes herself as “a free person, not closed in a box”.

One more tattoo on the same arm is “Chris”, the name of her son and ex-husband.

At last, she still has the contradictory tattoo of Roman numerals which means “October 30th 2014”, the marriage day of Queen Naija and Christopher Sails. However, she mentioned on her last video of tattoo meanings that she was going to get it covered with something else.

What are the 5 most popular songs of Queen Naija?

Here are the 10 best songs of Queen Naija:

Here is the list of Queen Naija’s Career milestones:

Where can you follow Queen Naija on the Internet?