Tom Hardy is one of the Hollywood’s much sought-after actors. He is mostly the bad guy and a gangsteron on a screen: Hardy is mixing up the film world. Discover the facts about Tom Hardy you may be interested in are below.
Content Menu

British actor Tom Hardy made his name famous with blockbuster Hollywood films such as “Mad Max: Fury Road”, “The Dark Knight Rises”, and “Inception”, in addition he was nominated for the Oscar for his role as John Fitzgerald in “The Revenant”, alongside Leonardo DiCaprio. Tom Hardy’s net worth is estimated to be around $50 million. There is no exact way to know the actual wealth of Hardy, WealthyLeo focuses on his estimated net worth.

Tom Hardy’s full name is Edward Thomas Hardy, who surprised everyone with the aloud thought of ending his career early.

The 41-year-old actor is still admired by many audiences for his appearance. Withal, Hardy won a model contest, before turned into acting.

How has Tom Hardy increased wealth since the beginning of his career?

In 2001 he appeared first time in front of the camera in the mini-series “Band of Brothers”, produced by Steven Spielberg and Tom Hanks. Shortly afterwards Hardy made his movie debut in Ridley Scott’s Oscar-winning film “Black Hawk Down”, alongside Josh Hartnett, Ewan McGregor. One year later, he made the breakthrough with as the villainous Shinzon in “Star Trek: Nemesis”.

After having played in Guy Ritchie’s gangster comedy “RockNRolla”, he got the another important main role of his career in the film “Bronson” in 2009, in which Tom played Charles Bronson, one of the most famous criminals in the United Kingdom.

Next year, Hardy joined the cast of Christopher Nolan’s supernatural sci-fi “Inception”, and since then his career has picked up speed. In 2011 he starred opposite Gary Oldman and Colin Firth in the spy thriller “Tinker Tailor Soldier Spy”.

Since 2012, he starred in many blockbusters such as “The Dark Knight Rises”, “Mad Max: Fury Road”, “The Revenant”, “Dunkirk”, also played alongside Shia LaBeouf in “Lawless”.

In September 2018 his new movie “Venom” was released in cinemas, where he played the anti-hero Eddie Brock / Venom from the Spider-Man universe.  Since 2017, Hardy has been also the star of the Television series “Taboo”. As of 2018, Tom Hardy’s net worth is estimated at 50 million dollars.

How old is Tom Hardy? 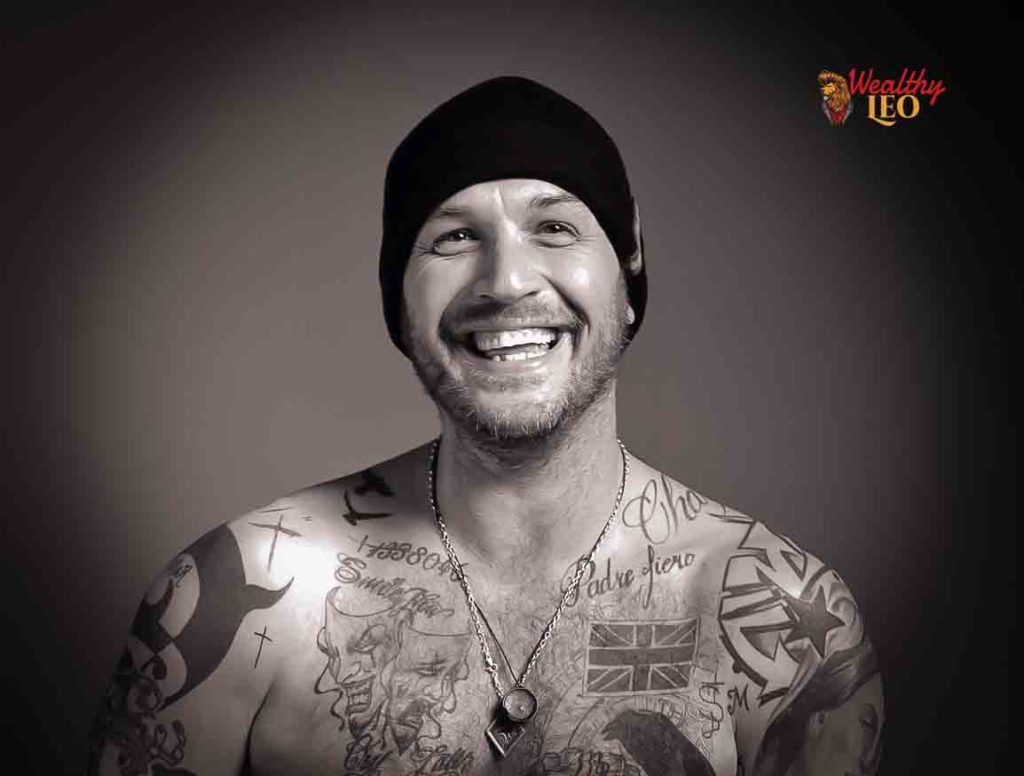 Tom Hardy was born on the 15th of September, 1977, in Hammersmith, London, England. He is currently 41 years old.

Tom Hardy whose full name is Edward Thomas Hardy was born on September 15, 1977, in a district of west London called Hammersmith. His mother is painter and artist  Elizabeth Anne Hardy and father is novelist and comedy writer Edward Hardy. Tom does not have any siblings. He is of Irish descent on mother’s side. Thomas spent his childhood in East Sheen, London.

It is known that Hardy had addictions to alcohol and crack cocaine when he was in his twenties.

What about personal life, Tom Hardy was married to producer Sarah Ward from 1999 to 2004. In 2003 he started dating actress Linda Park, but they broke up a year later. Also, he was in relationship with assistant director Rachael Speed starting from 2005. Although in 2008 their son was born, this fact did not prevent them from breakup in 2009. Same year Hardy met actress Charlotte Riley on the set of “Wuthering Heights”. They tied the knot in July 2014 in France. Their first son was born in October 2015.

Tom Hardy became an ambassador in a charity “the Prince’s Trust”, UK, in 2010. Since 2012, he has been a philanthropist of Bowel Cancer UK.

In 2015, Tom Hardy was named one of the best dressed British men by the version of GQ magazine. 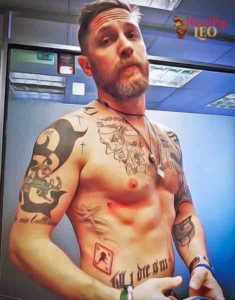 Tom Hardy has many tattoos, and most of them are extremely meaningful. For example, a tattoo of a leprechaun on the right arm as a sign of his Irish descent. A few tattoos are dedicated to his ex-wife Sarah Ward, “Till I Die SW” on his stomach and a dragon on the left arm. He got a star tattoo on the left upper arm when found out that his ex-girlfriend Rachael Speed was pregnant. Tom has the name “Charlotte” on the left shoulder dedicated to his current wife Charlotte Riley and the name of his agent “Lindy King”.

Moreover, he has tattoos devoted to his children, the phrase “Padre Fiero” that translates as “Proud Father” and “Figlio mio belissimo” that means “My beautiful son”. Both phrases are in Italian.

On his chest Tom has tattoos of the Union Jack, comedy and tragedy masks with the words “Smile Now Cry Later”, “1338046” that means Marine Corps number. On the left arm he has a wolf tattoo and a picture of the Madonna and Child inked. Also, Hardy has a skull in a hat on the left arm and large tribal design on the right arm.

Besides, the story of Hardy and DiCaprio’s bet is well known. Due to the fact that Leonardo DiCaprio gained an Oscar in 2016, Tom Hardy had to get a tattoo “Leo Knows All” that he made on the right arm.

What are the 10 most popular movies of Tom Hardy?

Here are the 10 best movies and TV series of Hardy:

Here is the list of Tom Hardy’s career milestones: