Discover how much worth of rapper YNW Melly is. To get to know more about him, other facts about YNW Melly you may be interested in are below.

YNW Melly Net Worth: How Much Money Does YNW Melly Make?

The emerging Florida rapper YNW Melly, who thought about making music when he was in the 8th grade when he first recorded on a friend’s mic. He felt to have rhythm and passion for it. YNW Melly’s career is still continuing to rise in the hip-hop world. The young rapper’s net worth is estimated to be approximately $4 million dollars. There is no way to know the current fortune of YNW Melly, WealthyLeo focuses on his estimated net worth.

YNW Melly’s real name is Jamell Maurice Demons, who rose to fame for his 2017 track “Murder On My Mind”. Before he started rapping, he was listening to Micahel Jackson, Louie, Chris Brown and Lil Wayne. He still follows Ed Sheeran’s music.

How has YNW Melly increased wealth since the beginning of his career?

YNW Melly started dropping songs to SoundCloud in the middle of 2015. He started blowing up after released “772 Love”, which sits at 5.8 million plays on SoundCloud at this moment. He dropped his debut mixtape entitled “JGreen1K: 510Wayz” in January 2016. Demons uploaded his hit song “Murder On My Mind” to SoundCloud on March 4, 2017 (The song has been played 13,400,000 times on Soundcloud to date). In April 2018, he released a single called “Virtual (Blue Balenciagas)”. After the success of YNW Melly’s hit track “Virtual”, he signed an album deal with 300 Entertainment. Afterwards he released his debut album “I Am You” on August 3, 2018.

A big portion of YNW Melly’s wealth comes from his hit projects like “Virtual (Blue Balenciagas)”, “Murder On My Mind” and “I Am You”.

How old is YNW Melly?

Born on a Saturday, May 1, 1999 and hailing from Gifford, Florida, Jamell is currently 19 years old.

YNW Melly did not graduate from school dropping out in the10th grade, as he got into trouble that led to shooting near school. Consequently, he was sent to jail.

Is YNW Melly Dead or Alive?

YNW Melly is alive and released a new album “I am You” that was awaited anxiously by his followers.

YNW Melly whose real full name is Jamell Maurice Demons was born in Gifford, Florida in 1999. There is no exact revealed information what kind of family he was brought up. However, Jamell is known to have younger brother and mother who YNW Melly dedicated his song “Mama Cry” to.

One thing that should be mentioned is his birth city, Gifford. Jamell always admits in his interviews that Gifford is not the best place to have a happy childhood as he was involved in violence and gun problems there since the childhood. He dreamed of getting out of this city and he succeded in it.

YNW Melly learned how to take the difficulties inherent in the challenging environment that he grew up in and to use them to make music. The main message of him as an individuality are “Stay different” and “Chase your dreams”.

YNW Melly has a girlfriend who he rarely posts photos with. Their photo together is on the cover of the album “I am You”.

Besides, the first time he got locked up when Jamell was 16 years old because of school shooting. He spent one year in prison that was not as bad experience as expected because he started to write songs in his jail cell, for instance “Virtual (Blue Balenciagas)”.

On 30 June, 2018 YNW Melly was arrested for marijuana and weapon possessions.

If you are looking for YNW Melly’s t-shirts, stickers, posters, mugs and other things, you can visit the RedBubble. 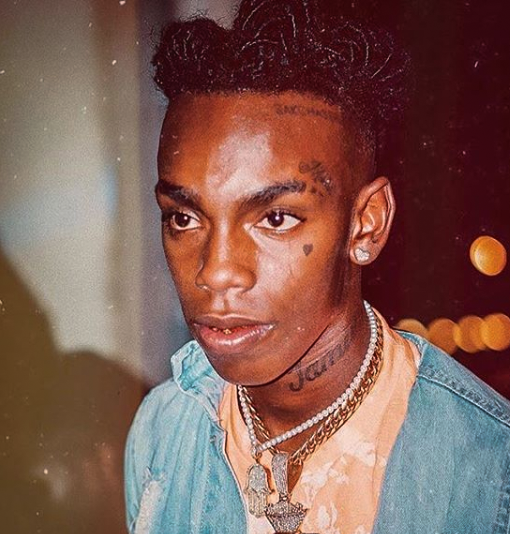 In one of the interviews with “No Jumper” YNW Melly commented he did not want to do any tattoos in jail because was not sure of the result. Therefore, YNW Melly did his first tattoo in 2017 after the release from prison. As at August 2018 (“No Jumper” interview released) he has a small heart tattoo on the left side of face. Moreover, there is the phrase “You are the one” above his right eyebrow. He did tattoos of his friends’ and girlfriend’s names on face and neck. Also he has his both arms tattooed.

What are the 10 most popular songs of YNW Melly?

Here are the 10 best songs of YNW Melly:

Here is the list of YNW Melly’s Career milestones:

Where can you follow YNW Melly on the internet?

You can find YNW Melly’s concert dates, and events on Bandsintown and Vividseats.